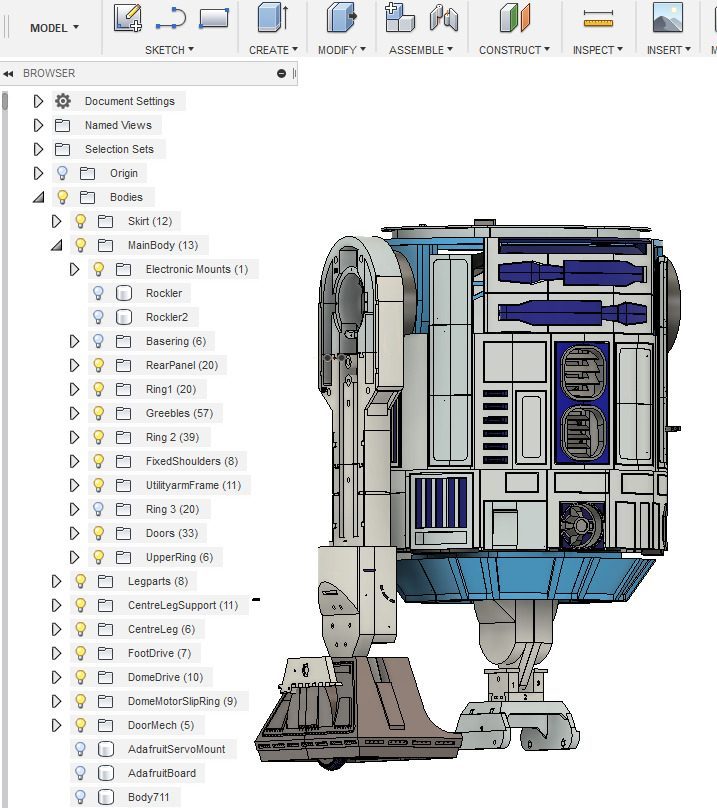 Some time ago, I’d decided that I wanted my own small R2D2 that I could create on a 3D printer.  While searching I stumbled upon Baddeley’s free full-sized 3D printed R2D2 designs on Thingiverse.  He’d broken down R2D2 into parts that would easily fit on a standard 3D printer and require no supports.  Also, his entire project was modeled in Fusion 360 which I’ve mentioned here before. I started in November with four rolls of filament thinking that would be a good start, hoping to have it ready for the Omaha Mini Maker Faire.  Fast forward to April and twenty rolls later, I barely had a primed and poorly sanded version with some wheels. I printed a majority of the body pieces at home but used the printers at Do Space for many of the internal parts and specialized materials.  With the larger build plate and wider nozzle of our Taz, I could crank out some of the internal prints faster than I could at home.  I was able to print nylon wheels, flexible belts, tires, and some of the functional ABS parts all on our Taz for free as long as I brought in my own filament.  Parts needing tighter tolerances, such as the drive mechanisms and servo mounts, were printed on our commercial uPrint and Dimension printers. After months of repeated cycles of filling, sanding, and priming, I have something that very much looks and sounds like R2D2.  I still have a few parts to finish and some sanding to do on places in the back but it’s looking pretty good. I’m fortunate that I had access to something like Do Space’s 3D lab and of course supervisors that were okay with me occasionally tweaking designs and bringing it in to show off.  I brought it into Do Space for an event in July and have since done quite a bit of detail work, soldered 300 LEDs, and added about 18 servos. Hopefully, it will be “finished” by the Make Lincoln event on Sept. 22nd. « Video Games Made by Make.Hack.Build.