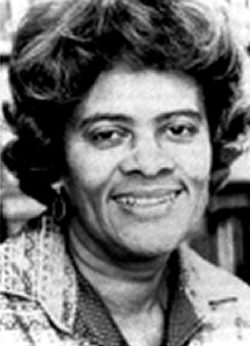 Evelyn Boyd Granville is an American mathematician who has made a large impact on STEM communities with her contributions to NASA and higher education.  She studied mathematics at Yale and became the second African American woman to receive a Ph.D. in the field.

Granville was born in Washington, D.C. on May 1, 1924.  She excelled in school and was valedictorian at Dunbar High School.  She received a college scholarship from a sorority of African American educators and went to Smith College in Massachusetts.  There, she studied math and physics and developed an interest in astronomy.  She earned her bachelor’s degree in 1945. She moved on to Yale and obtained her Ph.D. in 1949.

Shortly after graduating, Granville accepted a teaching position at Fisk University.  Two years later she left that position and became a mathematician for the National Bureau of Standards in Washington D.C. There, she worked on innovations for missile fuses.  Her next job would be with IBM, where she developed software that analyzed satellite orbits for various projects for NASA. She held a few more jobs in the space tech industry before returning to teaching.  Granville taught computer programming and mathematics courses for the rest of her career, retiring in 1997.

Evelyn Boyd Granville worked diligently for many years and saw her hard work pay off.  She created software for NASA, helped design missile fuses, and gave back to her community through teaching.  Her contributions to math and science will be remembered for years to come.

« Calling All Makers for the 2018 Omaha Mini Maker Faire!