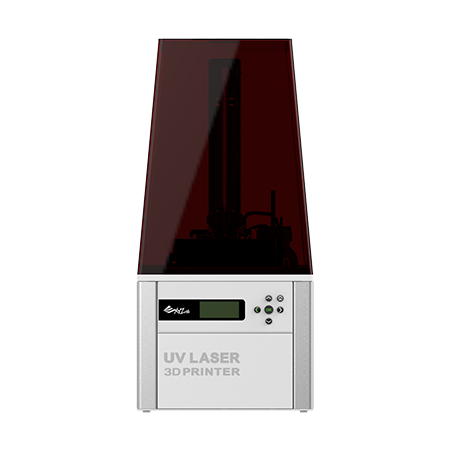 On one of my more recent trips to DoSpace, I was privied to see the first print from their latest equipment purchase, a 3D Resin printer. I heard that resin printers had a resolution that was impressive but the thing that fascinated me the most was that it printed models that were translucent. I began to think what I could make with it when ‘lightning struck my brain’, “Why not a cloaked Phantom?”.

See I play a miniatures wargame called X-Wing Miniatures. There we use scale models of your favorite Star Wars ships and duke them out on the tabletop. Lately I have included a Tie Phantom as part of my squadron. Its key ability is that it can cloak. Normally you mark that it is cloaked with just a token but would it not be cooler if the model looked like it was cloaked instead?

After finding a model on Thingiverse.com, I approached DoSpace to see if they would like to test out the capabilities of the new printer with my model. I had two 3d models, one more detailed than the other. I was hoping to see if we can test out how detailed one can get with the new printer. We came to an agreement and out came a beautiful, transparent Tie Phantom. Although the staff were unable to print the more detailed model, the other still looked awesome.

To make the game play work with this new figurine, I glued a magnet on the bottom of both the original the model and the clear model. Now I can swap out the figs on the stand with ease.

I tell you it was a hit with my league members. To swap out the model quickly and provide a bit of realism just left jaws on the floor. The crazy thing was they now want a model themselves. I have 4 orders and predict more to come.

I want to say thanks for the opportunity and look forward to seeing what we can ‘Do’ next.

Please Note: Our XYZ Nobel 1.0 resin printer is brand new and Do Space staff are busy learning and testing. As soon as we’re ready we’ll be offering to print items using this equipment similar to how we do with out uPrint and Dimension printers. Please keep an eye on this blog and we’ll be sure to post further details as they become available.

David Moore is a Sr. App Developer and avid tabletop gamer in Omaha, NE. You can find him and more of his work on tabletops at your friendly local game store.