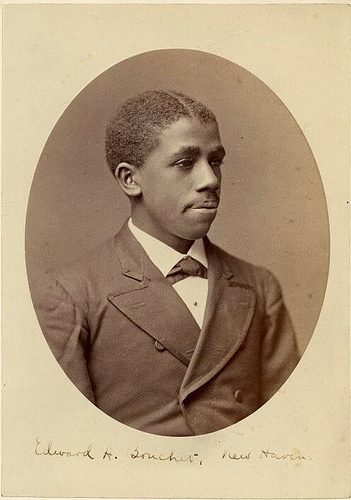 At only 24 years old, Edward Alexander Bouchet became the first African American to earn a PhD. in the United States.  If that wasn’t impressive enough, he earned his degree from the prestigious Yale University in the field of physics.  He used his education to give back to his community and worked in education for the whole of his career.

Edward Alexander Bouchet was born in New Haven, Connecticut, in 1852.  Bouchet’s parents, William and Susan, both held jobs at Yale. William was a porter and Susan washed laundry for the students.  They saw the opportunities that Yale could provide for their son and encouraged his education. Around age sixteen, Bouchet began studying at a private school where he focused on math, history, Latin, and Greek.  With the support of his parents and teachers, Bouchet graduated valedictorian at Hopkins Grammar School in 1870.

Bouchet then attended Yale University and earned his bachelor’s degree in 1874.  After receiving his bachelor’s, he stayed at Yale for another two years working on  his PhD. in physics.  When he earned his doctorate degree in 1876, he became one of a select few that held such a high degree in his field.  Bouchet aimed to be a college professor, however, he was unable to obtain a career in that field because of racial disparities.  He decided instead to work for a Philadelphia high school where he stayed for 25 years, teaching chemistry and physics. Bouchet retired in 1913 from a school principal job and died a few years later in 1918.  Since then, he has been recognized by Yale and several other schools with memorials and scholarships.

Edward Alexander Bouchet was a trailblazer in a time when society made it next to impossible for African Americans to achieve equal educational opportunities.  With support from family and teachers, he was able to reach his educational goals. He then went on to help children reach those same goals that he once strove for.

« Tuesday Tech Tip: Get the “view image” button back