Manny Gets A New Leg!

A member recently requested help with a pretty special project, help making a new prosthetic limb for a disabled goat.  Manny the feinting goat suffers from a genetic disorder that affected his leg.  The leg joint was bent and fused in place.  His owner had a prosthetic for Manny already but as Manny’s conditioned progress the prosthetic no longer fit.  That is when she reached out for Do Space for help.  Our Volunteer Reagan Pufall agreed to assist the owner with the project. With input from a local vet and Manny’s breeder Mr. Pufall assisted the owner with making a new prosthetic for Manny.  First, they took a cast of the joint which was then shaped sanded to form.  Then using photogrammetry a 3D model was made and edited.  The design allows for greater air flow to the joint, weighs less than his current prosthetic, and allows for Manny’s owner to switch out the post when needed for the time of year and as it wears out.  Manny’s apprecation was apparent when he received the prosthetic. He nuzzled Mr. Pufall’s hand and ambulated around for the first time since his old prosthetic failed.  He spent the rest of his evening walking around his yard and sitting under his favorite tree. 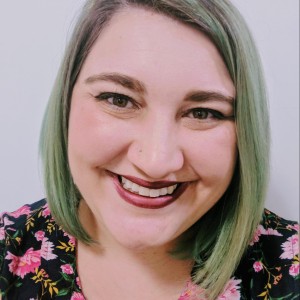 Cherie is the Community Engagement Specialist at Do Space. In her free time she likes to spend time with her husband Travis, chihuahua Elvis, corgi Evie, and cat Ella.

Girls Who Code and Addressing the Gender Gap in Technology »