Father-Son Time in the 3D Lab

When I was a kid my neighborhood was filled with signs of our parents’ ambitious hobbies. I had a friend whose dad was building a sea plane in his garage. Not just a regular plane. A sea plane with a wood frame and a bunch of foam on the bottom so that he could land it on lakes or something. It seemed kind of crazy.

But that was probably no crazier than my dad building his own 50-foot amateur radio tower in our back yard. He even used a bow and arrow to launch wires into the trees of the woods behind our house to boost the radio antenna’s range.

I may have thought all of this was a little insane as a kid, but now as an adult and a parent myself, I admire – and somewhat envy – people like my dad and my friend’s dad. They were doers before the term was around. So when Do Space Omaha opened I saw it as an opportunity to teach our son about being a maker.

Dad and his friends knew about subjects such as engineering, electricity and communications. My friend’s dad had a machine shop in his basement. My dad had large spools of wire and ohm meters – whatever those do. (Wikipedia says they measure electrical resistance, by the way.) That kind of maker spirit didn’t really trickle down to me, however. Example: I look at YouTube videos to figure out how to replace the sprinkler heads in my lawn.

That’s why I’ve been looking for ways to get our 9-year-old son interested in how to create things. He’s already a Lego ninja and a Minecraft Frank Lloyd Wright, so I wanted to combine his love of building and technology. My first attempt last summer didn’t go well. After watching the show Battle Bots on TV, I told our son we should build our own little fighting robots. But I didn’t know where to even start and the idea fizzled.

When Do Space opened I decided to try again. My wife and I took our son to the space late last year so we could register and take a tour. Our son was fascinated by the 3D printers. The staff explained to him how the printers worked and said he could design something at home and then e-mail or bring in the STL file to Do Space. Then his object could be printed in plastic piece by piece.

Over the course of a few months I downloaded different 3D design apps at home and we messed around with them. One app is called Tinkerplay, which allows you to design 3D figures. Our son loved picking out virtual shapes to fit together, mixing and matching human, robot and monster parts. Eventually he chose a Raptor-looking dinosaur and put it together in the app. After a bit of trial and error I was able to download the STL file with all of the parts to a thumb drive. Then we took the file to Do Space.

We went to the 3D Lab and a Do Space worker named Sonya opened up our son’s file on her computer and placed the 23 virtual parts onto a grid to maximize printing space. It was like arranging cookie cutters on dough so that you get the most out of the space.

Sonya explained to our son each step of the process and let him pick which color of plastic he wanted to use. After a bout of indecision he chose orange. We were told that with the current wait list it would take a few weeks to print the orange dinosaur figure. We went home and every few days our son asked me if I’d gotten the notification e-mail from Do Space yet. He was super excited.

Two weeks later the e-mail came. I asked him if he wanted me to pick up the dinosaur on my lunch break while he was at school. He said no way, he wanted to come with me to get his creation. That night we drove to Do Space and his eyes widened as the container with all of the orange parts was brought out. The cost was $15 – which wasn’t too bad considering the price of toys at the store. And my son got to design this one!

He started putting the dinosaur together right there at the Do Space information counter. The pieces fit together ball-and-socket style – which is how the parts are designed in Tinkerplay. That makes it easy for the finished product to be assembled and rearranged if you want.

When we got home he beamed as he showed mom the dinosaur and how it moved. He had sworn me to secrecy and didn’t let me tell her we were picking it up. The best part is that he’s been telling his friends about how he made a dinosaur and he’s been thinking about what he wants to make next.

I want to thank everyone at Do Space for sparking our son’s imagination and helping him to learn about being a doer. A 10-inch dinosaur isn’t a sea plane or a radio tower. But it’s a start. Do Space is a great way for kids to learn how to harness their creative potential and turn their ideas into reality. 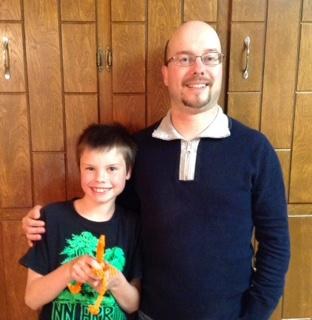 ABOUT TOM SHAW
Tom is a data analyst and before that worked as a journalist.